While studying the Federal Energy Management Program (FEMP) I came across an interesting dataset published by the Data.Gov (https://explore.data.gov/) initiative (Reference #1). I did a quick re-organization of the published raw data, analyzed it and created the following charts. I was also interested to see if there is any correlation with factors external to the dataset. One of the factors I looked at was the size of the agency in term of number of employees. While I looked for the historical data on the number of employee by agency, I could only find data on the cumulative personnel size for the Federal government (Reference #2). I have listed the names of the analyzed agencies under Reference #3.

Following are the charts from my analysis on the annual consumption of electrical energy (in MWh). 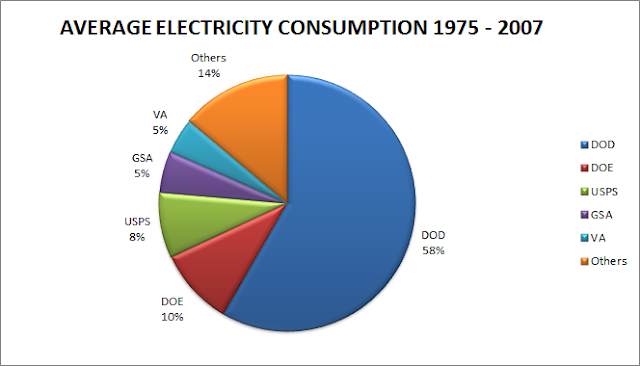 The Data.Gov has published energy consumption data from 38 Federal Agencies. I focused on the top 5 electrical energy intensive agencies which constituted 86% of the overall consumption, remaining 33 agencies only contributed 14% of the total, which I combined them under “Others” category (the segmentation is a classic 80:20 rule example; i.e. more than 80% of the energy intensity came from less than 20% of the agencies). From Chart 1 it can be seen that the DOD is by far the biggest electricity consumer, which I assumed would be the case before I had even looked at the data, but had not imagined this big a size of the pie for them. Secondly, seeing the VA and the GSA among the top 5 was a surprise. I admit that I am not familiar with operations of various federal agencies, but I was surprised to see the VA and GSA’s consumption is even more than some of the other prominent technology intensive agencies such as NASA. I guess VA’s many medical centers are contributing to this large energy consumption percentage.

Yearly Trend of Electrical Energy Consumption of the Top 5 Agencies

Chart 2 shows the trend of electricity consumption from 1975 through 2007. The immediate take-a-way from this chart is the big difference between the DOD energy profile and the rest of the immediate other five profiles. While the DOD has undertaken several programs to improve energy efficiency, I was more interested in the profiles of the next four agencies. Chart 3 is the zoomed-in view of these four agencies.

From Chart 3, while the DOE and GSA have pretty much maintained flat lines over the years, it was interesting to note the continued upward trends of USPS and VA consumption of which the former is more significant. Given the economic conditions and competitive situation the USPS is in and looking at the data, I believe they would gain critical financial benefits by implementing energy efficiency measures. (Note: Looking at the downward trend of energy consumption starting at year 2005 point, USPS may already be on track to improve energy efficiency, but without the data beyond 2007 it is difficult to tell).

Per Capita Electrical Energy Footprint for the Federal Government

Finally, I was interested to see if there is a connection between the energy consumption and any other factors associated with the agency size.  One of the factors I studied was the number of employees in the Federal Government.  Chart 4 shows this relationship. (Note: This analysis was for all the agencies combined.)

From Chart 4, it is interesting to note that while the number of federal employees dropped over the years from 5 million to 4 million (blue line), the electrical energy consumption on per employee basis actually increased at a high rate (I calculated this value by dividing the total federal energy consumption by the number of employees). I am not sure the reason for this, but I have the following hypothesis:

Thanks to the Data.gov initiative for making this dataset available for curious analysts like me to study the data and share some of the insights. I hope to update these charts when new dataset is published by Data.gov that includes data beyond year 2007.